André Thévet
The camphruch (also called camphur by Paré and camphurch by Aldrovandi) is an amphibious creature similar to a unicorn, living in Maluku Islands in Indonesia, first described by André Thévet.

Camphruch is similar in size and shape to a stag. Its neck is covered in thick greyish wool. Its two front legs are like those of a deer, but the hind legs are webbed, like the legs of a goose, providing mobility in water. The creature feeds on fish, which it pierces with its single horn on the forehead. The horn is three feet and a half in length and as thick as a human arm in its widest. The animal can move it like an Indian cock its crest. The locals say the horn is an excellent remedy against poison.

"Campur" generally means "to mix" in Indonesian languages, possibly providing an etymology to the name.

A similar amphibious creature with a single moveable horn, according to Garcia de Orta, can be found in the southern part of Africa, between Cape of Good Hope and Cape Correntes. 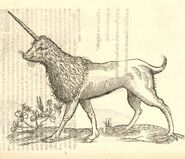