Du jiao shou (獨角獸 dú jiǎo shòu), also latinized as too jou sheu, means "creature with a single horn" in Chinese and is a generic name for a unicorn, such as the one from European legends. Julius Klaproth points out that the Tibetan unicorn is often called with this name by the Chinese.

Charles Gould found two pairs of statues named du jiao shou on the road leading to the Ming tombs, about eighty miles north from Beijing. They have a lion-like body and head, cloven hooves and a short blunt horn projecting from the center of the forehead. Being unable to find anything about them in any book, he believed they constitute a separate type of Chinese unicorns.

The Spirit Way connecting the 13 tombs of Ming and Qing emperors has 18 pairs of animal guardians, one standing and the other sitting. Among those are two qilins and two xiezhi. These statues are likely what drew Gould's attention. The drawing in his book certainly portrays the xiezhi. 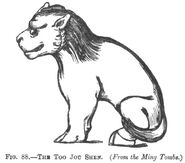